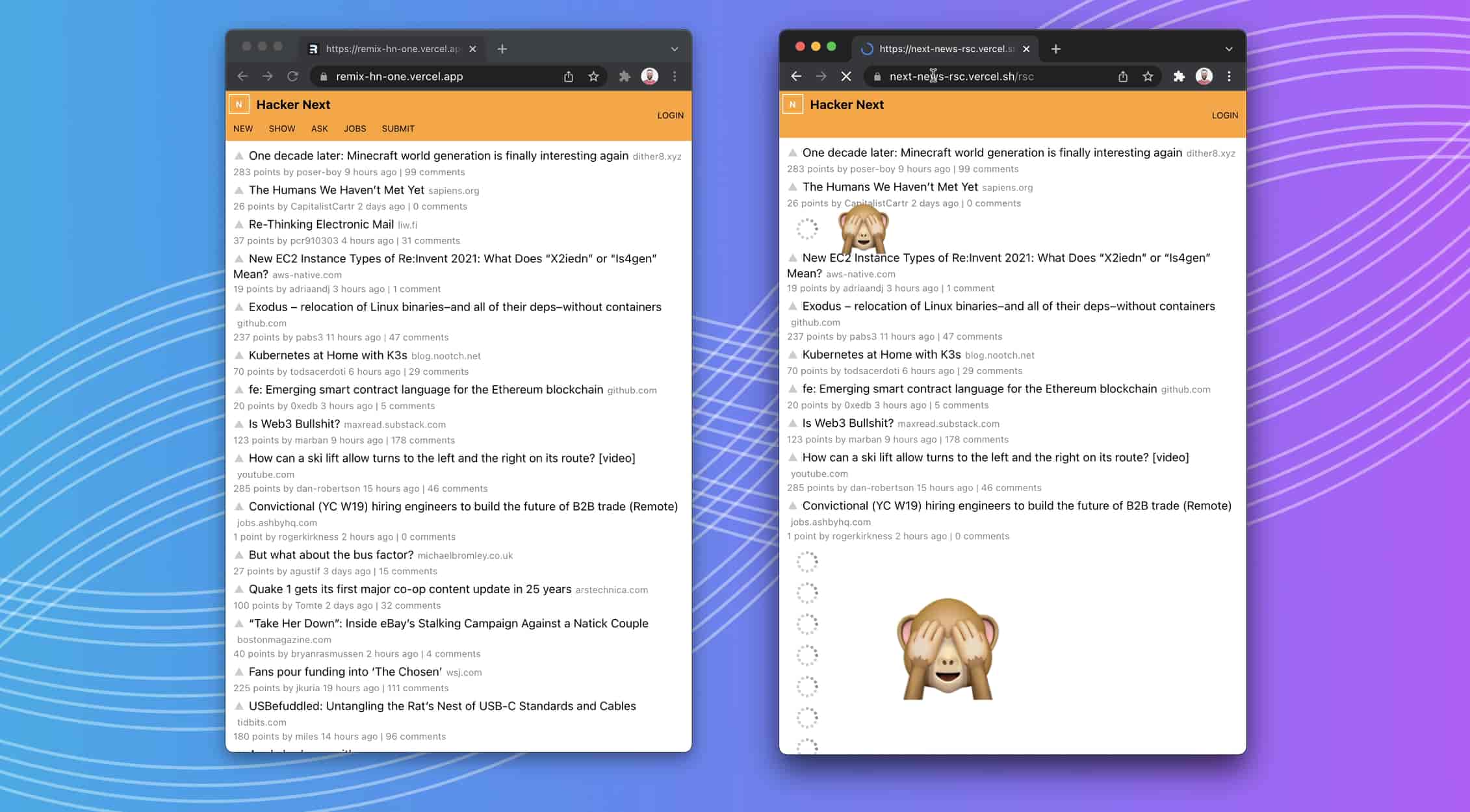 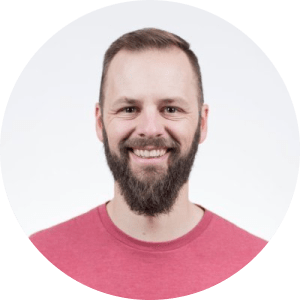 One big question keeps coming up after the Remix v1 release:

What about React Server Components?

Great question! Like many of you, we've been experimenting with React Suspense since it was first announced in 2018. In fact, the early versions of Remix used it. Realizing it probably wouldn't be released by the time we were ready, we built the async parts of Remix into the framework and are very happy with the results.

Now that React Server Components (RSC) seem to be getting more attention, we've taken another look and done some testing to try and figure out the best way to take advantage of them in Remix. We are well aware that RSC is still in the experimental stage so we do not intend this research to be the last thing we ever say about RSC and Remix. We just thought it'd be useful to share our perspective for the sake of everyone who is using Remix (and React Router) and curious about using RSC as well.

But first, a little background: What are React Server Components?

In today's React ecosystem, there are three ways to load data into your app:

Almost every app in the React ecosystem today uses render-fetch waterfalls. This is the default behavior for any data fetching that runs inside a useEffect() hook, including libraries like react-query, useSWR, Apollo Client, and many others.

Out of the box, React Server Components are also a render-fetch waterfall. Because fetching is done inside of components, your app doesn't know what to fetch until a component renders.

The problem is that out of the three, the render-fetch waterfall provides the worst UX. Let's run some tests to see why.

I took the React Server Components demo from the core React team at Facebook, shuffled code around into Remix's route conventions, and then deployed both versions to servers in Australia so we could really feel it here in the US (I want Laksa King so bad right now. If you know, you know).

The Remix version isn't using React Server Components, it's just plain ol' Remix on React 17. My goal here was to see what kinds of performance I'd get out of the box on each and see where Remix could benefit from RSC.

While RSC is still just an experiment, and this is just a toy app, I was honestly surprised that Remix is over twice as fast as RSC on the initial page load. (I should have eaten 2x the Laksa King last time I was in Sydney.)

If you look at the network tab, you can see how Remix loads resources in parallel while RSC results in a cascading waterfall of requests. Fetch code, render, fetch server component, render. This UI doesn't have any nesting either, which is why I was so surprised to see Remix outperform RSC by so much. Loading nested UI is where Remix really shines over the alternatives.

However, I also recognize that the demo from the React team doesn't really take advantage of React Server Components' killer feature, which is the ability to stream the response during the initial server render. Without streaming rendering, RSC is really just another way to fetch inside of components.

I decided to measure against a React Server Components demo that also incorporates streaming server rendering. I've been excited about this feature for (I think) years. I grabbed the Next.js Hacker News clone and shuffled the code into Remix's data loading conventions to see what the two felt like side-by-side. Then I deployed both apps to Vercel so that they're running on the same servers.

This time I fully expected Remix to lose.

Again, Remix was more than twice as fast as RSC and Next.js, even without the HTTP caching (the real HN has user data in it so that wouldn't fly). Additionally, the Remix version didn't show any spinners and didn't have any content layout shift.

The strategy RSC were built for is Render As You Fetch. RSC alone is insufficient to render as you fetch. It needs a framework above it to kick off a parallel load of resources before rendering. Neither of these demos has any nesting where this becomes critical.

Facebook has Relay, a fancy compiler, backend infrastructure, and multiple teams of engineers that get paid way more than you and I to know what to fetch before rendering.

But you have Remix 🤗

In today's landscape, Remix is uniquely positioned to take full advantage of Suspense, RSC, and SSR Streaming: it already knows everything about a page just from the URL, just what React needs for render as you fetch.

Additionally, Remix already has the benefits of co-locating your server and client code, including the {name}.client.js and {name}.server.js file convention (it's usually not needed, but it hints to the compiler which files should run only in one place or the other).

For the developer experience, Remix route modules are already "server components". Using RSC is just an implementation detail of Remix itself.

When RSC is ready for adoption in Remix, migrating will probably be as easy as renaming one of your route files:

However, we are going to wait until RSC is stable and doesn't have the performance and UX issues we've seen here before integrating it into Remix.

The real test will be Remix + RSC vs Remix Alone. If Remix + RSC provides a better user experience, we're all over that. But it's hard to justify putting in that effort when we're already beating the current demos by 2x or more.

Again, those are demos of fake apps, so we're not taking them too seriously. However, we do have a pretty major concern with the tradeoff RSC makes on the network tab.

It seems todays web development zeitgeist is an obsession with initial page loads and Time To First Byte (TTFB). But here's an equally important question: what happens after you've got the user on the page?

Obsessing only over TTFB is like trying to get ripped by working out but ignoring your diet (ah crap, that's what I do! ... Laksa King sounds so good right now though).

Close your M1X MacBook Pro, grab my kid's chromebook from school, unplug the CAT-6 cable and hop on my in-laws WiFi. You'll see a whole different personality come out your website.

The user experience of spending an hour reading status updates, updating records, creating posts, and sending messages on a low power device with a spotty network is just as important as the initial page load on any device on any network at Remix. So what does it have to do with RSC?

I did a "speed run" through the React Team's demo to see how long it took to get the app to display each page. It's a silly metric, but when I use a slow website, that sluggish feeling compounds over time and gives me a general feeling that "this website isn't that great". I think this captures that feeling.

As you can see in this demo, the RSC version loads 34x more JavaScript over the wire than the Remix version (!).

No it was 16x with a primed browser cache

Oh Right. 16x More JavaScript?! What the heck is going on here?

In addition to streaming rendering, another one of React Server Components' big features is "Zero-Bundle". The idea is to send less on the initial page load to speed it up (we saw earlier that in this demo it didn't). The idea is:

This sounds great on the surface, but now every time the user interacts with the site the template is repeated in the server component payload. In other words, every time you fetch from the server you get the fully rendered markup, not just the data.

Clicking on a single item in the Server Components demo results in a fetch for this (behold: a "server component").

That's over 4 kB. If you click all three items, you get a response just like it for each one.

Let's contrast with Remix. The first time you click a link, you have to download the code-split JavaScript template for the item view:

But from now on, each item click only transfers this little bugger:

Because server components couple your data to your template, your users have to download the template with every single interaction related to that component. While it's "Zero-Bundle" for your JavaScript, it's "Infinite Bundle" for subsequent navigation 😟.

Of course, this is a little toy demo app, and things always pan out differently in the real world, but logically, these templates will always be larger than the data. In my experience, for every ounce of data there's a pound of markup (omigosh I want a pound of Laksa right now).

I messed around with these two demos for several days: loading them from my phone while on the freeway (not driving, ofc, but wishing I could drive to Laksa King), waiting for my kids to get out of school on that hill where the cell connections are spotty, and even inside a church building where almost no cellular waves get through.

In every single case, without exception, Remix is faster than React Server Components. By a lot.

It's unclear to me which network, device, and server conditions RSC was built for. Sending the whole document from Remix always beat the first chunk from RSC: whether the network was fast or slow.

This isn't to say that RSC is "bad". It's still experimental! I'm just saying they aren't compelling for Remix right now. When RSC is stable we will apply the same rigorous testing we have demonstrated here and recommend them for Remix users if they provide a better UX.

My hunch is that RSC has a chance of providing a better UX when your user's network is fast, but your server's data loading is slow. That will be my next bit of research (these demos all had fast server data loading). I expect the first chunk to be useful to the user sooner than your slow server can get a full document to the user through Remix.

But if your slow server is the problem, you can fix that. You can make your server fast, you can't do anything about your user's network. And that's the pitch of Remix, take advantage of modern infrastructure and send less stuff over the network.

Back end infrastructure is getting really good. Remix can run your entire app at the edge (close to your users) on platforms like Cloudflare Workers (see our demo) and (soon) Deno Deploy. Not only can you can run your app servers at the edge, but you can get your data to the edge too with things like Fly.io Postgres Read Replicas, Cloudflare KV and Durable Objects, FaunaDB, and others. These technologies enable you to render full pages—even with user data!—in mere milliseconds.

If you can render a full document, with user data, in 500ms, or even 50ms with Remix, you might ask yourself why you'd want to stream that in with spinners bouncing around (even if it was twice as fast instead of twice as slow today).

We're anxious to hear what the React team has to say about React Server Components and streaming rendering at React Conf this week. For now, we are just happy to be able to provide the core team with our feedback and we hope our research helps push the technology forward. Stay tuned for more news from us in this area!